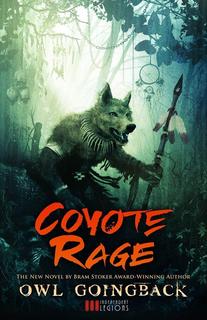 Standing in the doorway was the shape-shifter who had earlier visited his room, but he no longer wore the identity of a man. He had reversed his skin and now wore it fur side out, revealing that he was indeed Coyote. The Trickster had stopped his transformation mid-change, and towered in the doorway as half-man and half-beast. Standing upright on hind legs, he stood nearly seven feet tall, his fur mattered with blood and bits of gore from the victims he had murdered.

Behind Coyote were two more of his kind. Smaller and less ferocious, they stood on all fours for they did not have the power to turn their skins and walk upright.

Coyote looked down at the burning mixture barring his way, his lips pulling back in a snarl. “Stupid, old fool. Do you think your tricks can stop me?” The shape-shifter spoke in his native tongue, a series of growls and yips, but Luther understood him, for all members of the Great Council were given the gifts of animal and human speak.

“Stop you? No.” Luther answered, knowing Coyote could also understand him. “Just delaying you long enough for what I need to do.”

Turning his back on the Trickster, he crossed the room to the back wall. He removed the piece of charcoal from his leather bag and drew a large rectangle on the concrete blocks. Reaching back into the bag, he removed another small handful of the herbal mixture and sprinkled a line on the floor in front of the rectangle.

He whispered a few words of power, and then touched the lighter’s flame to the powdered mixture on the floor. As before, the gunpowder ignited with a flash, causing the other ingredients to burn. Gray smoke drifted up and touched the wall, and the concrete blocks within the rectangle disappeared, creating a doorway

“You shall not get away!” Coyote howled.

Luther stepped through the opening, but he did not find himself outside the nursing home; instead, he entered a world few men had ever seen. But he had walked the shadowy land of Galun’lati many times on his journeys to the Great Council.

As the mixture barring entrance into the storage room finally burned out, Coyote charged into the room and chased after Luther, but as he raced toward the back wall, the magical doorway suddenly closed and the Trickster crashed headfirst into concrete blocks.

Coyote howled with pain and anger, while fading into the night could be heard the laughter of an old Indian man.