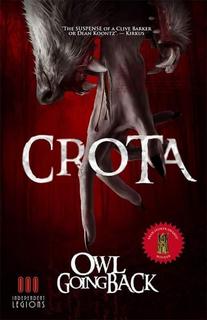 He tossed one end of the rope to Randy.

“Quick. Find something to tie that to. You’re in no shape to haul me up by yourself.”

Randy scrambled across the roof, searching for some fixture to fasten the rope to. He spotted a carved niche in the far corner of the roof. He was tying the final knot when Steven called him.

Randy turned, his fingers till fumbling with the rope. Steven’s face was expressionless, his voice somber and collected.

“Randy, my lad, please hurry. Something just brushed past my legs.”

Warning bells went off in Randy’s head. Finishing the knot, he raced back to the trapped professor.

Steven Fuller was looking down, his face thoughtful, as if he was trying to see through the roof to the room below him. He glanced back up at Randy.

“It’s back again … I believe it’s sniffing me. I think you’d better pull me out.”

Steven grabbed the rope, wrapping it around his arm. Randy took up the slack and started to pull.

The scream exploded from Steven Fuller. His head flew back, his face contorting in hellish torment.

“No!” Randy cried. He pulled desperately on the rope, trying to free the imprisoned man.

Steven screamed again. His head snapped straight back. His eyes flew open. He was staring at Randy, staring through him. A thin trickle of blood started at each corner of his mouth. The flow increased, cascading over his lips and down his chin, staining the front of his coveralls. His mouth moved slowly, quivered. He gasped, coughed, and tried to speak, but failed. A roar echoed up from the room below. Then, in the blinking of an eye, he was gone.